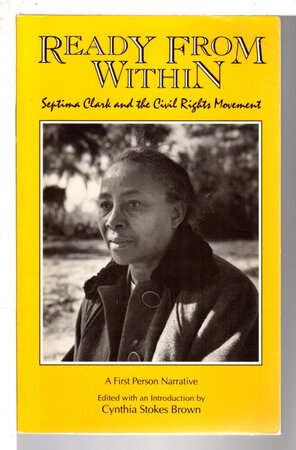 READY FROM WITHIN: SEPTIMA CLARK AND THE CIVIL RIGHTS MOVEMENT.

Navarro, CA: Wild Trees Press. (1985). First edition - A first person narrative" by this teacher, activist and pioneer in grassroots citizenship education, whom Martin Luther King called the Mother of the Movement edited and with an introduction by Cynthia Brown. Septima Clark was born in 1898 in Charleston, South Carolina, the daughter of a former slave and a laundrywoman, and she taught for over 30 years in South Carolina. In 1956 she was fired for refusing to disavow her membership in the NAACP, and after that she worked fulltime in running workshops, first for Highlander and later for the SCLC and the American Field Service, where taught people basic literacy skills, their rights and duties as U.S. citizens, and how to fill out voter registration forms. Among those who participated in one of her workshops was Rosa Parks. Illustrated with photographs. Includes a chronology and notes on sources. 134 pp. Wild Trees Press which published this account was founded by Alice Walker and Robert Allen. ISBN: 0-931125049.

Condition: Very near fine in illustrated wrappers (hint of sunning to the spine)