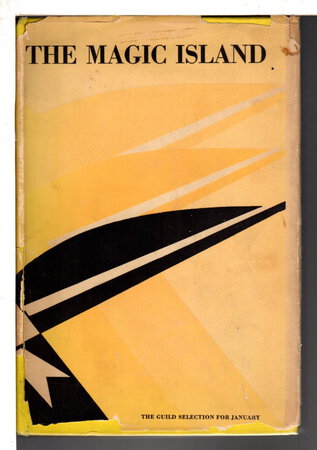 New York: The Literary Guild, 1929. dj. Hardcover - An early edition (same year as the first) of this extremely popular book at the time, a first hand account of voodoo rituals and witchcraft in Haiti that William Seabrook experienced during his stay there in the 1920s. It has been credited with introducing the idea of a zombies to Western culture. It also includes the the story of Faustin Wirkus, a young U.S. Marine Sergeant from Pennsylvania sent by the American administration to the remote island of La Gonave to take charge of the gendarme, who was declared king by the natives and reigned there for several years. Illustrated with 20 full page drawings by Alexander King and photographs by the author. x, 336 pp.

Condition: Very good in yellow cloth (marginal tears to a few pages, not affecting the text) in a good dust jacket with the stylized geometric cover illustration used by the Literary Guild at the time. (tear to spine, loss of approximately 1/2 at base of spine, overall edgewear.