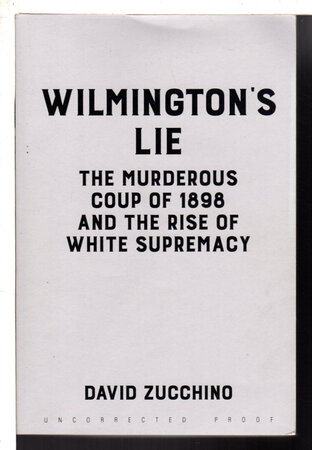 WILMINGTON'S LIE: The Murderous Coup of 1898 and the Rise of White Supremacy.

New York: Atlantic Monthly Press, (2002). First edition - 2021 winner of the Pulitzer Prize for nonfiction. Based on contemporary newspaper reports, diaries and letters, this tells the history of a brutal insurrection which was "the only violent overthrow of an elected government in American history. It halted gains made by blacks and restored racism as official government policy, cementing white rule for another 70 years. It was not a race riot as the events of November 1898 came to be known, but rather a racially-motivated rebellion launched by white supremacists." In 1898 Wilmington, North Carolina, was an "example of a mixed-race community - a bustling port city with a thriving African American middle class and a government made up of Republicans and Populists, including black aldermen, police officers, and magistrates. With a coordinated campaign of intimidation and violence, the Democrats sharply curtailed the black vote and stuffed ballot boxes to steal the 1898 mid-term election. Two days later, more than 2,000 heavily armed white nightriders known as Red Shirts swarmed through Wilmington, terrorizing women and children and shooting at least 60 black men dead in the streets while hundreds of local African Americans took refuge in nearby swamps and forests." It also follows the lives of some of the residents after the insurrection - some ending in despair, one becoming the first African American judge appointed to a federal court - but all with one thing in common: they never went back. Notes. 393 pp.