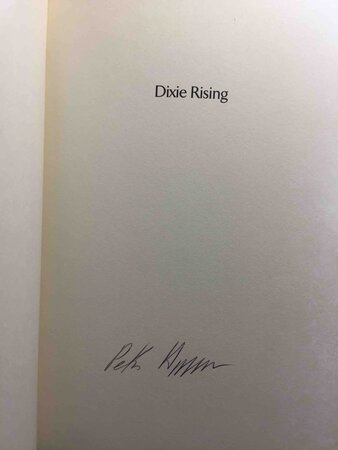 DIXIE RISING: How the South Is Shaping American Values, Politics, and Culture.

New York: Crown, (1996) dj. SIGNED hardcover first edition - A book which is even more true now than when it was written. The author "argues that the South is the region which is increasingly defining the whole United States. The roots of the major national debates on conservative politics, race, guns and states' rights are in the South - debates which the South once was losing, but has now reshaped. In a chapter on George Wallace, he traces the 1994 Republican take-over of Congress back to Wallace's racially charged campaigns that lost the white South for the Democratic party, changing the American political landscape. Applebome makes race the central issue, but also explores other southern influences like country music and Southern Baptism." SIGNED on the half title page. Photographs, notes on sources, bibliography, index. xii, 385 pp. ISBN: 0-812926536.