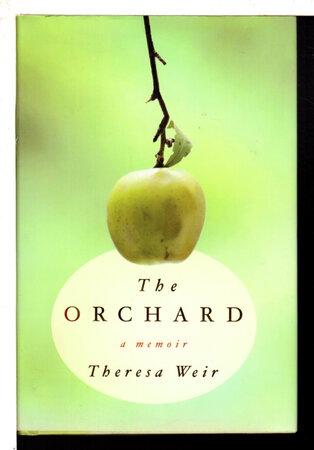 THE ORCHARD: A Memoir.

New York: Grand Central Publishing, (2011) dj. Hardcover first edition - A slightly fictionalized memoir, but one which tells a powerful "story of struggle, resilience, and love in the American heartland . . . Married after only three months, young Theresa finds life with Adrian on the farm far more difficult and dangerous than she expected. Rejected by her husband's family as an outsider, she slowly learns about the isolated world of farming even as she falls more deeply in love with her husband, a man she at first hardly knew. In an outcome that reflects the haunting realities of the landmark book 'Silent Spring,' the increasingly dangerous chemicals used on farms begins to take a tool on the land and the people who tend it." In discussing this book, Weir stated "I wanted it to be a parable. . . I didn't want to intrude upon a story that I didn't feel was my story, but was rather everybody's story. Throughout the book, starting with the opening scene, there's this real lack of consideration for the next generation, for our children and our children's children. There's the acceptance of things that shouldn't be accepted. I wanted to drive home the fact that we are all responsible, and we are all important." 227 pp. ISBN: 978-0446584692.