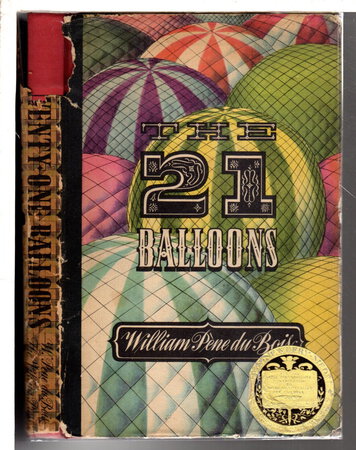 New York: The Viking Press, (1947) dj. Hardcover first edition - A charming story of a retired San Francisco professor of arithmetic who - after years of dealing with unruly boys in the classroom - wants nothing more than peace and quiet, and so he devises the idea of a gentle balloon flight around the world. Things don't turn out quite as he expects when he crash lands his balloon on the island of Krakatoa, shortly before it erupts. There he discovers an strange society of nothing but billionaires - all from San Francisco - supported by a hidden diamond mine. A wonderful combination of gentle humor, utopianism, adventure, some surrealist fantasy, a bit of steampunk and factual information ("Half of this story is true and the other half might very well have happened'), including some real balloon inventions, illustrated with delightful pencil drawings the by author. Although set in 1883, this was written for a world just emerging from World War II - in fact, the first paragraphs which contrasts the speed of different forms of travel refers to changes coming in the Atomic Age - and so one can understand the appeal of this book which depicts a world of wonders far removed from war. Winner of the 1948 Newbery award. SIGNED on the front endpaper by du Bois. 180 pp.

Condition: Just about fine in a fair only dust jacket (the dust jacket is missing approximately 2 inches at the top of the spine, has rubbing and wear at the folds, chipping at the corners, with the original price of $2.50 on the dj flap) Dust jacket is now protected by an archival cover, and it did protect the book.