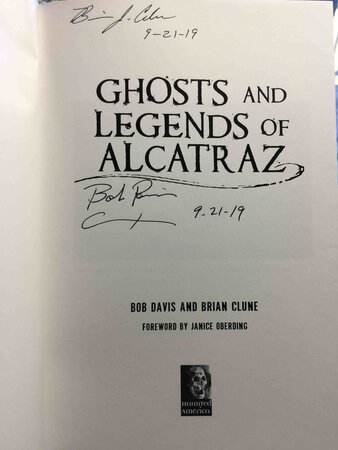 GHOSTS AND LEGENDS OF ALCATRAZ

Charleston, SC: The History Press, (2019). SIGNED first edition - A title in the Haunted America series - stories of the infamous island prison of Alcatraz, in the San Francisco Bay."Rufus McCain, who died a brutal death at the hands of a fellow inmate, is said to roam the grounds, and the basement cells used for solitary confinement were rumored to be so frightening that inmates who endured one stint never wanted to go back. Multiple escape attempts were thwarted, including two attempts by Sam Shockley, who was later executed with fellow inmate Miran Thomson." SIGNED by both authors on the title page and dated in the year of publication. Foreword by Janice Oberding. Illustrated with photographs throughout. Bibliography. 144 pp. ISBN: 978-1467143875.