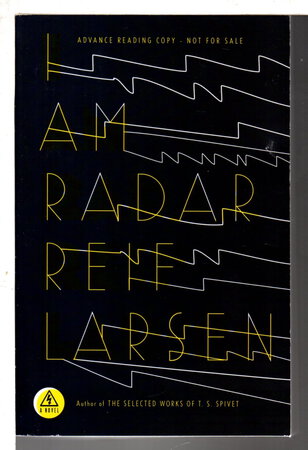 I AM RADAR: A Novel.

New York: Penguin, 2015. First edition - The author's second novel, a wide-ranging and complex story in which the divergent threads gradually come together. Beginning with Radar's mysterious birth, this expands outward and through history. "Deep in arctic Norway, a cadre of Norwegian schoolteachers is imprisoned during the Second World War. Founding a radical secret society that will hover on the margins of recorded history for decades to come, these schoolteachers steal radioactive material from a hidden Nazi nuclear reactor and use it to stage a surreal art performance on a frozen coastline. This strange society appears again in the aftermath of Cambodias murderous Khmer Rouge regime, when another secret performance takes place but goes horrifically wrong. Echoes of this disaster can be heard during the Yugoslavian wars. . . Decades later, in the war-torn Congo, a disfigured literature professor assembles the largest library in the world even as the country around him collapses. All of these stories are linked by Radar - now a gifted radio operator living in the New Jersey Meadowlands - who struggles with love, a set of hapless parents, and a terrible medical affliction that he has only just begun to comprehend." The Washington Post called this "grandly ambitious... another masterpiece" and compared it to Pynchons V. and David Foster Wallaces Infinite Jest. 653 pp.