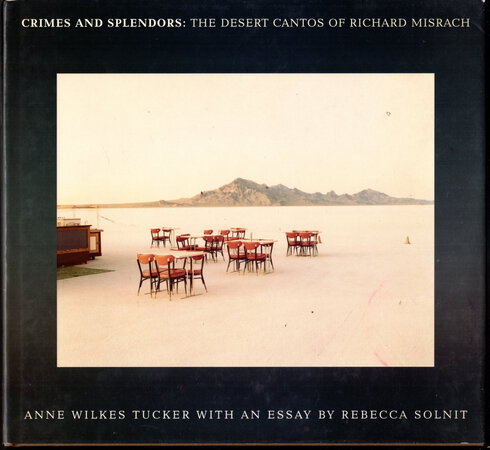 CRIMES AND SPLENDORS: The Desert Cantos of Richard Misrach.

Boston: Bulfinch Press / Little Brown, (1996) dj. Hardcover first edition - The first comprehensive survey of Richard Misrach's epic work-in-progress - The Desert Canto - this also served as the exhibition catalogue for a retrospective organized by The Museum of Fine Arts, Houston, from June 2 to August 25, 1996 and in Tucson, Tacoma, Chicago and Honolulu through 1998. "The beauty, mystery, and abuse of the American desert are topics explored by Richard Misrach in his breathtaking Desert Cantos series, one of the most ambitious and innovative photographic projects of our time. Evolving over the course of two decades, the series now comprises eighteen numbered and named subseries, or cantos, and a prologue. With subjects as diverse as a military base in Utah, a man-made flood in California, sublime skies in Arizona, and arts happenings in Nevada, [his] images raise probing and compelling questions about contemporary society's relationship to the desert. Included in this beautifully illustrated book are more than sixty Desert Cantos photographs that have never before been published, as well as some of the artist's best-known and most-admired images." Contains 160 color and 10 black and white illustrations. Text by Anne Wilkes Tucker and an essay "Scapeland" by Rebecca Solnit. Chronology compiled by Lauri Nelson. Large oblong format. 191 pp. ISBN: 0-821222546.

Condition: Near fine in a near fine dustjacket (stamp with previous owner's name, upper corner of back cover slightly bumped, some creasing to top edge of dj).