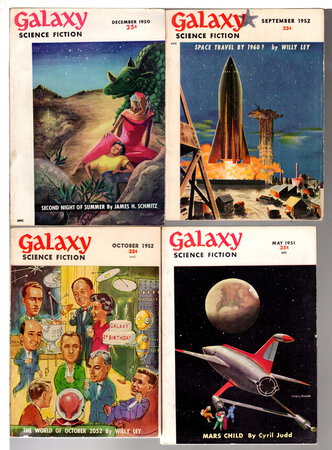 New York: World Editions Inc 1950-1952. First edition - A set of eight complete issues from the first two years of Galaxy Science Fiction digest, arguably the most influential science fiction magazine of its time, one which brought a new maturity to the stories, and an emphasis on how changes in the future affected people rather than on the technology. Frederik Pohl who worked with Gold and succeeded him as editor said that Gold brought a "sophisticated intellectual subtlety" to magazine science fiction, The magazine published all new and original stories. Among the authors contributing to these issue are James Schmitz. Richard Matheson, John D. MacDonald, Katherine MacLean, Gordon R. Dickson, Frederik Pohl, C. M. Kornbluth, Judith Merril, Isaac Asimov, Damon Knight and, of course, Willy Ley who contributed a article for each issue. Each is 160 pp, illustrated throughout. Among the notable covers in this group is that be Chesley Bonestall for the May 1951 issue and that of Emsh for the second birthday party issue with caricature portraits of the leading science fiction writers of the day - including Ray Bradbury, Fritz Leiber, Robert A. Heinlein - filling the front and back covers. ISBN: ioba virtual fair.

Condition: All issues are in a solid very good to near fine condition with only minor wear, usual toning to the pages, no mailing labels and bright and attractive covers. Uncommon in this condition.