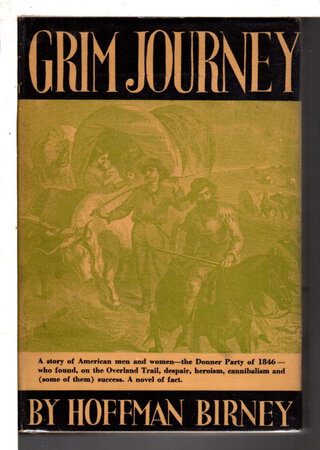 New York: Minton, Balch & Co., 1934. dj. Hardcover first edition - A fictionalized account of one of the most tragic episodes of the Overland Trail: "The story of the adventures of the emigrating company Known as the Donner Party, which, in the year 1846, vrossed the plains from Independence, Missouri, to California. With an account of their sufferings upon the desert of the Great Salt Lake and their final tragic fate when many suffered death on the headwaters of the Truckee River in the Sierra Nevada Mountains. The narrative from the lips of a survivor, Mr. Eddy, late of Illinois, who lost wife and children by a horrible fate, and who participated in the rescue of his late companions of the migration." Includes the four page "Roll of the Donner Party." Author's note. vii, 275 pp. Map endpapers.

Condition: Very near fine in a like dustjacket (price-clipped) - uncommon in this condition.