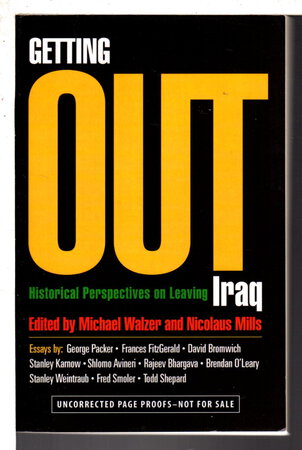 GETTING OUT: Historical Perspectives on Leaving Iraq.

Philadelphia: University of Pennsylvania Press, (2009). First edition - A book which approaches the issue in two sections: The first "examines seven historical cases of how and how not to withdraw: Britain's departure from the American colonies and from India, the French withdrawal from Algeria, Israel's unilateral withdrawal from Gaza, and the U.S. decision to leave (or not leave) the Philippines, Korea, and Vietnam." The second section focuses on how the United States got into Iraq and it might leave. Many years later, this has still not been resolved. Includes contributions by Shlomo Avineri, Rajeev Bhargava, David Bromwich, Frances FitzGerald, Stanley Karnow, Brendan O'Leary, George Packer, Todd Shepard, Fred Smoler, and Stanley Weintraub. 148 pp.