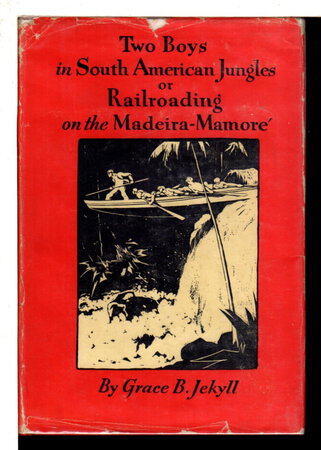 TWO BOYS IN SOUTH-AMERICAN JUNGLES Or Railroading on the Madeira-Mamore.

New York: Dutton, (1938, c 1929) dj. Hardcover - Uncommon novel for older children and young adults written by the wife of a member of the engineering firm - May, Jekyll and Randolph - who were contracted by the wealthy American entrepreneur Percival Farquahar to build the line from the Bolivian border to Porto Velho. As she notes in the preface "day by day, for months, I witnessed its construction." Construction of this now long abandoned Madeira-Mamore Railroad took almost 6 years, from 1907 to 1912, and it became known as the Devil's Railroad because of the thousands of deaths of construction worker. This book tells the story of "two brothers in search of fortune and fame, travel from New York to Porto Velho, 1,700 miles up the Amazon & Madeira Rivers beyond the last outposts of civilization. The path of adventure takes one of boys to the front line camps, where he has many startling and unusual experiences with poisonous snakes and Indians and is kept captive by a white man on his rubber plantation. "Illustrated with "strong black and white drawings" by Beth Krebs Morris (a frontispiece and 7 internal plates) ix, 167 pp.

Condition: Near fine in very good- dust jacket (price-clipped, overall edge and some small chips to the dust jacket.)