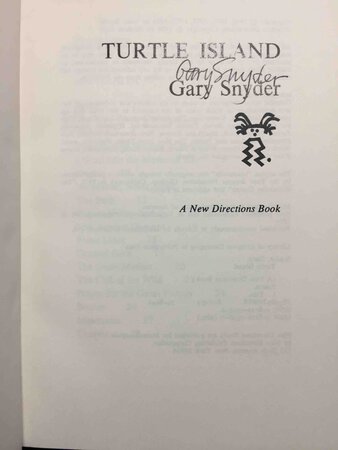 New York: New Directions, (c. 1974.). SIGNED hardcover - Woodcut illustrations by Michael Corr. Winner of the Putitzer Prize for poetry - according to Snyder because it was "the only book that was quite that gutsy ..jumping-in-with-all-fours, taking a stand on things." Snyder explains in his introductory note that 'Turtle Island - the old/new name for the continent, based on many creation myths of the people who have been here for millenia, and reapplied by some of the them to 'North America' in recent years.' SIGNED on the title page. A copy which was printed on demand. 114 pp. ISBN: 0-8112-05460.

Condition: Fine in navy blue cloth with gilt lettering on the spine in a fine dust jacket.