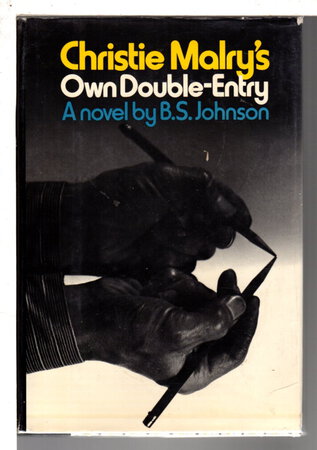 New York: The Viking Press, (1973) dj. Hardcover first edition - The last novel published before his death by this "most original of the English experimental writers of his generation. Combining a bellicose avant-gardism with pointed social concerns, he won the praise of critics and fellow writers as well as a readership not usually gained by a literary maverick. [This] is Johnson's most broadly humorous book, though his humor has a bite. Christie is a simple man. His job in a bank puts him next to but not in possession of money. He encounters the principles of Double-Entry Bookkeeping and adapts them in his own dramatic fashion to settle his account with society. Under the column headed 'Aggravation' for offenses received from society (the unpleasantness of the bank manager is the first on an ever-growing list), debit Christie; under 'Recompense,' for offenses given back (scratching the faade of an office block), credit Christie. All accounts are to be settled in full, and they are in the most alarming way." Basis for the 2002 film of the same name. 180 pp plus "the final reckoning.". ISBN: 0-670220132.

Condition: Very near fine in a very good dustjacket (some small chips at the ends of the dj spine, original price of 5.95 still present) .