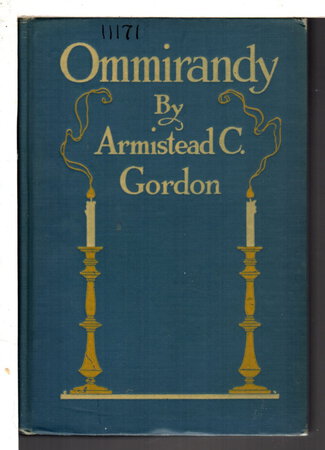 New York: Charles Scribner's Sons, 1917. Hardcover first edition - A novel by this historian which falls into the plantation tradition of post-bellum Southern writing as exemplified by Thomas Nelson Page (who co-wrote one book with Gordon), a world of loyal ex-slaves and kindly and concerned masters. Written mostly in dialect, this tells the story of Ommirandy, a former slave who refuses to recognize her own emancipation. When she plans a trip to see her son, she reassures her master and former owner that there are lots of white gentlemen, just like you all over the state who will look after an old-time mammy. Illustrated by Walter Biggs with a frontispiece with a tissue guard and 15 inserted plates on glossy paper. 295 pp.

Condition: Ex-library but with relatively few markings and overall very good in illustrated art deco cover (some pages were carelessly opened, leaving chips in the margins)