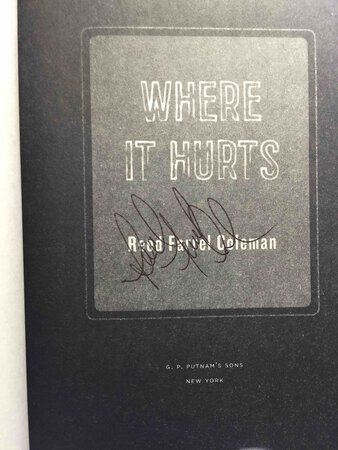 New York: Putnam, (2016) dj. SIGNED hardcover - The first thriller featuring ex-cop Gus Murphy, a gritty novel about the other side of Long Island. "Divorced and working as a courtesy van driver for the run-down hotel in which he has a room, Gus has settled into a mindless, soulless routine that barely keeps his grief at arms length. But Guss comfortable waking trance comes to an end when ex-con Tommy Delcamino asks him for help. Four months earlier, Tommys son T.J.s batteredbody was discovered in a wooded lot, yet the Suffolk County PD doesnt seem interested in pursuing the killers. In desperation, Tommy seeks out the only cop he ever trusted - Gus." Nominated for the Edgar and Anthony Awards and winner of the Shamus Award, 2017. SIGNED on the title page. 353 pp. ISBN: 978-0399173035.