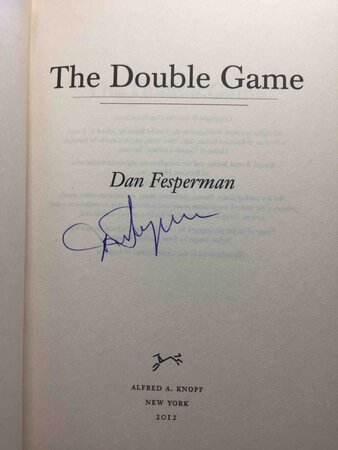 New York: Alfred A. Knopf, 2012. dj. SIGNED hardcover - A novel which draws upon the espionage classics of the Cold War. "A few years before the fall of the Berlin Wall, spook-turned-novelist Edwin Lemaster revealed to up-and-coming journalist Bill Cage that hed once considered spying for the enemy. For Cage, the news story created a brief but embarrassing sensation and heralded the beginning of the end of his career in journalism. More than two decades later, Cage receives an anonymous note hinting that he should have dug deeper into Lemasters pronouncement. Spiked with cryptic references to some of Cages favorite spy novels, the note is the first of many literary bread crumbs that lead him back to Vienna, Prague, and Budapest, each instruction drawing him closer to the complex truth." SIGNED on the title page. Includes an appendix listing 222 espionage novels in Cage's library, both by title and by year of publication. 356 pp. ISBN: 978-0307700131.