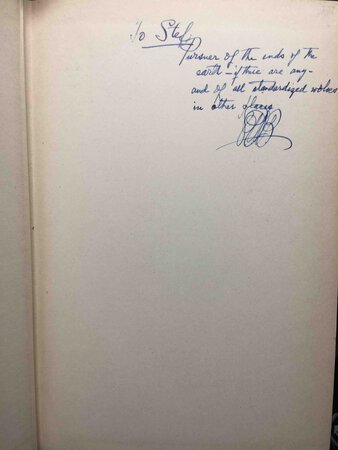 NEXT DOOR TO A POET.

New York: D. Appleton-Century, 1937. dj. SIGNED hardcover first edition - "A Friendly Glimpse of Edwin Arlington Robinson" - a memoir of a friendship between two writers who first met in 1923 at the McDowell Colony in New Hampshire in 1923. Frontispiece of Robinson. INSCRIBED by the author on the front endpaper "to -- pursuer of the ends of the earth - if there are any - and of all standardized wolves in other places." 98 pp.

Condition: Near fine in navy blue cloth in a very good dust jacket (the dust jacket had been trimmed slightly, folded and tipped onto the rear endpapers, so there is a little damage to the flaps from the glue - but it did keep the colors bright and fresh.) Uncommon in dj and especially so signed by the author.