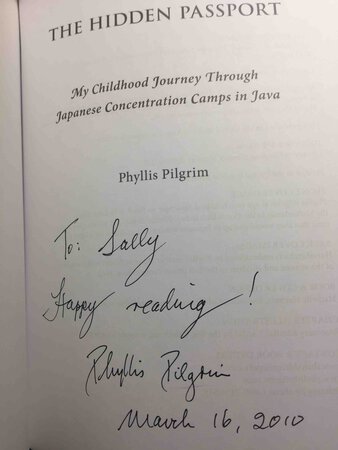 THE HIDDEN PASSPORT: My Childhood Journey Through Japanese Concentration Camps in Java.

San Diego, CA: By the author, (2009). SIGNED first edition - Phyllis Pilgrim was born in Tampico, Mexico, of an American mother and a Scottish father who worked for the Shell Oil Company. Later transferred to Borneo and Java, this book focuses on describing her experiences from five to nine years old, when she, her mother and brother were interned as prisoners of war in a Japanese camp during World War II in Java. She also tells her father's story, who was held in a different prison, mostly in solitary confinement, and discusses how these early experiences affected her life. INSCRIBED on the title page and dated in 2010. Illustrated with photographs and maps. 180 pp. ISBN: 978-0578030562.