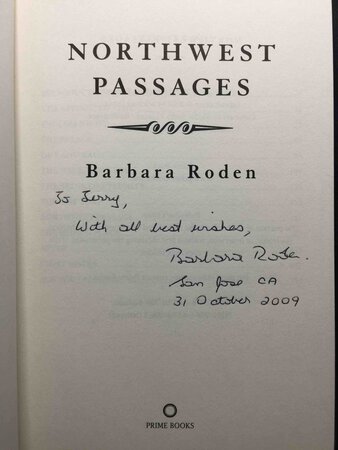 [Germantown, MD]: Prime Books, (2009). SIGNED hardcover first edition - Bram Stoker award winning Canadian author's first collection of short fiction, notable for the variety of their settings. Eleven "deftly executed tales of subtle horror. . . 'Out and Back' tells of an abandoned amusement park whose attractions are sinister snares set to entrap unwary thrill seekers. 'In The Palace,' a skeleton crew working the night shift at a luxury hotel finds the premises haunted by the ghosts of a serial killer's victims. Both the title story and 'The Wide, Wide Sea' are set in Canadian wildernesses, where the alienated mingle freely with the ghostly. Roden is a copublisher of the classic ghost story imprint Ash Tree Press, and her fiction resonates with echoes of Poe, Conan Doyle, Coleridge, Dickens and other masters of antiquarian horror. This yields powerful expressions of the supernatural in the book's two tales of 19th-century Antarctic exploration, 'Endless Night' and 'The Brink of Eternity,' whose carefully crafted old-fashioned style lends atmosphere to depictions of a terra incognita rich with awe and terror." (Publisher's Weekly) Introduction by Michael Dirda. INSCRIBED by the author on the title page and dated in the year of publication. Story notes, colophon. One of only 2000 copies. 254 pp. ISBN: 978-1607012054.