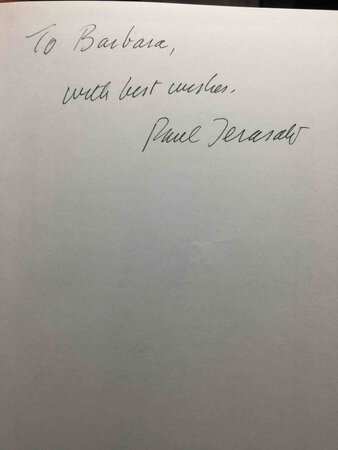 Los Angeles: UCLA Tissue Typing Laboratory, (1991). SIGNED hardcover first edition - An important medical history, accounts of organ transplantation from the earliest years, with In his preface, Terasaki states "Transplantation is the miracle of 20th century medicine. This startling development occurred in a relatively short space of time, in two short decades of the 1950s and 60s. From impossibility in the early 50s, the field exploded into today's clinical therapy. Gathered in this volume are personal recollections from thirty-five key pioneers of transplantation who were vitally involved during this narrow window of time. Each author was free to offer his own story and all chapters are published in their unexpurgated form." Included are contributions from three Nobel Prize winners - Joseph E. Murray, E. Donnall Thomas, and George D. Snell as well as Thomas Starzl on "My Thirty-Five Year View of Organ Transplantation", Christiaan Barnard "The First Human-to-Human Heart Transplant" and Norman Shumway "A Heart Transplantation Narrative: The Earliest Years" and much more. Each contribution is followed by references and the author's curriculum vitae. INSCRIBED on the front endpaper by the editor and contributor, Paul I. Terasaki. Illustrated with many photographs, index. Large format, a heavy book, vii, 704 pp. ISBN: 0-960460675.