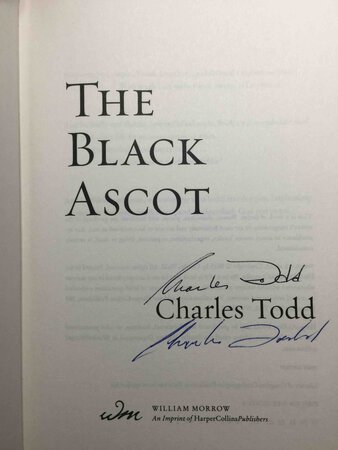 New York: Morrow (imprint of Harper Collins), (2019) dj. SIGNED hardcover first edition - An Inspector Ian Rutledge mystery, set in 1921 in an England still recovering from the Great War - "An astonishing tip from a grateful ex-convict seems implausible - but Rutledge is intrigued and brings it to his superior at Scotland Yard. Alan Barrington, who has evaded capture for ten years, is the suspect in an appalling murder during Black Ascot, the famous 1910 royal horse race meet honoring the late King Edward VII. His disappearance began a manhunt that consumed Britain for a decade." A highly recommended series of historical mysteries. SIGNED on the title page by both authors ("Charles Todd" is actually the mother/son writing team of Caroline and Charles Todd.) 342 pp. ISBN: 978-0062678744.