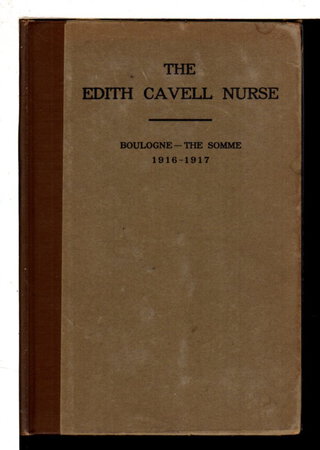 THE EDITH CAVELL NURSE FROM MASSACHUSETTS: A Record of One Year's Personal Service with the British Expeditionary Force in France, Boulogne - the Somme, 1916-l9l7, with an Account of the Imprisonment, Trial and Death of Edith Cavell.

Boston: W. A. Butterfield, 1917. Hardcover first edition - Edith Cavell was a British nurse who had established a training school for nurses in Belgium; after the War broke out, she saved the lives of those from both sides without discrimination, but she also helped 200 allied soldiers escape from Belgium - and for that she was convicted of treason and executed by the Germans in 1915. Massachusetts established a fund to recruit a nurse to serve in the War in the memory of Cavell - the nurse selected was Alice Fitzgerald, and this little book includes both some comments from her on her service and an account of Cavell's imprisonment. Illustrated with photographs. xv, 95 pp.

Condition: Very good in tan boards with brown cloth spine (some rubbing and wear to the covers, black ink spots on back board.)