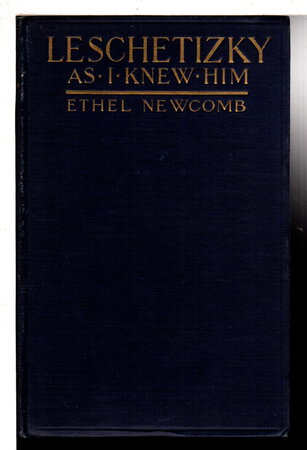 LESCHETIZKY AS I KNEW HIM.

New York: D. Appleton and Company, 1921. Hardcover first edition - The American pianist, Ethel Newcomb, lived in Vienna in the late 19th and early 20th century where studied with Theodor Leschetizky from 1895 to 1903. In 1903, she made her debut with the Vienna Philharmonic Orchestra, and she worked for Leschetizky as his assistant from 1904 to 1908. This is not a formal biography, but, as she states in the foreword, rather a picture of the musician as a teacher and mentor. vii, 295 pp plus 2 pp publisher's ads.

Condition: Very good overall in dark blue cloth with gilt lettering on the spine and front cover. Some fraying to the ends of the spine, gift inscription on front endpaper dated in 1922. No dust jacket.