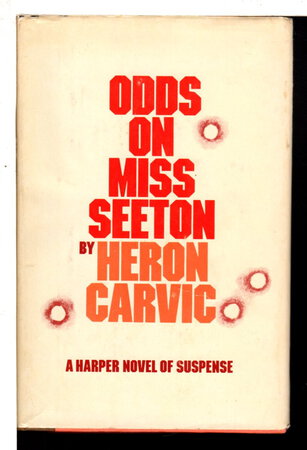 New York: Harper & Row, (1975) dj. Hardcover first edition - True first edition of the fifth novel in the still popular Miss Seeton series (and the last one written by Carvic.) " With her exceptional skills at drawing sketches that portend or predict the future and the past, she often gets embroiled in mayhem, drugs, and murder. Nonetheless, she only has her umbrella as a tool and weapon for any emergencies, though she is quite the match for anyone that would take her on. Alongside Mrs. Seeton is Scotland Yards Superintendent Delphick, who has been nicknamed the Oracle, and his sidekick Detective Sergeant Bob Ranger." Miss Seeton is the universal maiden aunt, a believer in high standards - and a slightly younger and more unconventional version of Miss Marple, and the books as a whole are more satiric and darker than one would expect. While this might have been Carvic's last novel, in the 1990s this series was resumed by two other authors using the pseudonyms of Hampton Charles and Hamilton Crane. 150 pp. ISBN: 0-060108746.