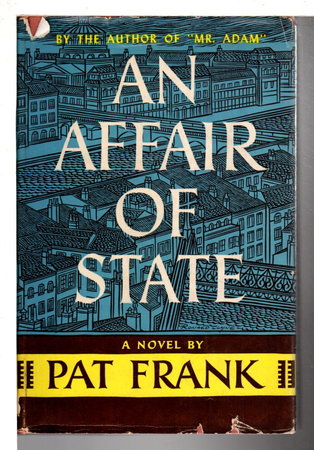 AN AFFAIR OF STATE.

Philadelphia: Lippincott, (1948) dj. Hardcover first edition - The author's second novel, a political thriller set, and written, at the dawn of the Cold War, and a work inspired in part by his own career as an international journalist. "Young, outspoken Jeff Baker comes out of World War II determined to work for the State Department. When he lands his assignment in 1949, he becomes the third secretary of the US embassy in Budapest, an observation post behind the Iron Curtain." Frank was perhaps best known for the post-apocalyptic novel "Alas Babylon." 256 pp.