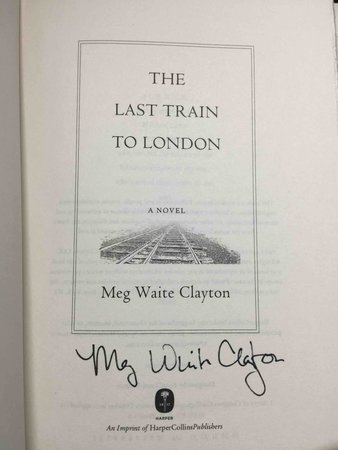 THE LAST TRAIN TO LONDON.

New York: Harper Collins, (2019) dj. SIGNED hardcover first edition - Novel set in the years just before World War II, based on the true story of the Kindertransport rescue of ten thousand children from Nazi-occupied Europe - and of one brave woman who helped them escape. "Truus Wijsmuller, a childless Dutchwoman, risks her life to smuggle children out of Nazi-occupied lands to the nations that will take them. . . . Tante Truus, as she is known, is determined to save as many children as she can. After Britain passes a measure to take in young refugees from the German Reich, she dares to approach Adolf Eichmann, the man who would later help devise the 'Final Solution to the Jewish Question.' Truus then sets off in a race against time to lead hundreds of children on a perilous journey to freedom." SIGNED on the title page. Author's note. 451 pp. ISBN: 978-0062946935.