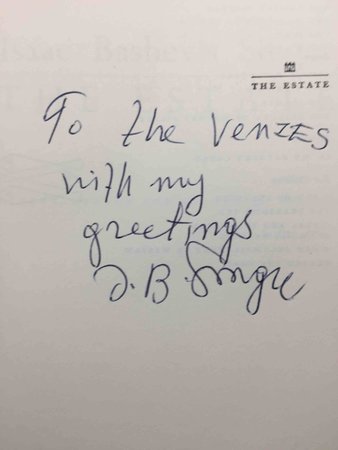 New York: Farrar, Straus & Giroux, (1969) dj. SIGNED hardcover first edition - The sequel to "The Manor," portraying the period between the Polish insurrection of 1863 and the end of the 19th century, a period during which the Jews began to play an important part in Polish industry, commerce, arts and science. INSCRIBED on the half title page and SIGNED I. B. Singer. Translated from the Yiddish by his nephew Joseph Singer, Elaine Gottlieb and Elizabeth Shub. 374 pp.

Condition: Near fine in black cloth in a very good minus dust jacket (price-clipped, some wear to the ends of the spine and the corners, creasing to front flap)