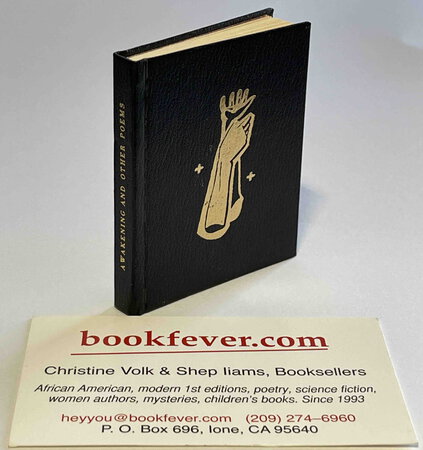 AWAKENING AND OTHER POEMS.

Skokie, IL: Black Cat Press, 1978. First edition - A small collection of poems by this African American journalist, poet and activist, a "gleaning" of recently discovered poems from the files of Norman W. Fogue. Several reflect the inevitable bitterness of a sensitive black man living in a world where he is despised. Davis began his career as a writer in Chicago, and he is considered part of the Black Chicago Renaissance. In the late 1940s, he moved to Hawaii, where he resided until his death - and where he also met the young Barack Obama , A miniature book (7.1 x 5.8 cm), bound in black faux leather, with a gilt-stamped title on spine and gilt decoration on front cover, marbled endpapers. Dedication, foreword, introduction by Norman W. Forgue. Binding by Bela Blau. Unpaginated. Limited to 249 copies.