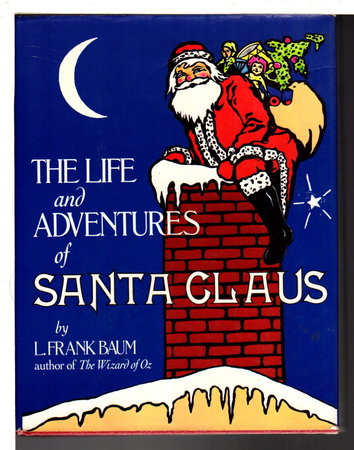 THE LIFE AND ADVENTURES OF SANTA CLAUS.

New York: Greenwich House / Crown Publishers. (1993). Hardcover - Originally published in 1902, this fantasy tells how Santa Claus was once a human foundling adopted by woodland fairies, who grew up surrounded by elves, but as he discovers the world of human beings, he is moved by the children he sees, and decides that his mission in life will be to bring joy to mortal children by making and distributing toys. Divided into his Youth, Manhood and Old Age. Facsimile edition with some of the original black-and-white illustrations by Mary Cowles Clark. Includes a new foreword by Naomi Kleinberg. xi, 206 pp. ISBN: 0-517420627.

Condition: Very near fine in a like dustjacket (bit of foxing to top edge of textblock)