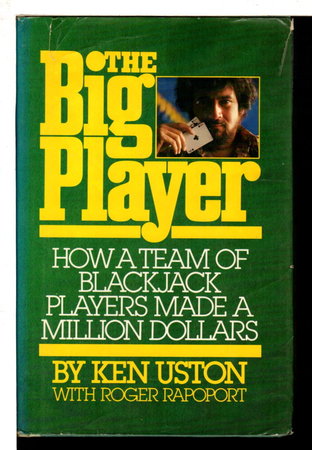 THE BIG PLAYER: How a Team of Blackjack Players Made a Million Dollars.

New York: Holt, Rinehart and Winston, (1977) dj. Hardcover first edition - From 1972-1974, Uston (who was also a senior vice president of the Pacific Stock Exchange) gained widespread notoriety for perfecting techniques to do team card counting in numerous casinos worldwide, earning millions of dollars from the casinos - when the table was "hot" the Big Player - Uston - came in to bet. He was banned from casinos around the world, although he continued to gamble in disguise. He filed a lawsuit against the casinos, and successfully received a ruling from the New Jersey courts that casinos could not bar someone simply for counting cards. In response, many casinos changed their systems in response, increasing the number of decks in games, or setting betting limits, etc. In 2005, Uston was the subject of the History Channel documentary, "The Black Jack Man". Glossary. 217 pp. ISBN: 0-030169216.

Condition: Very good in a good only dust jacket (toning to pages, edgewear and short tears to dj, sunning to spine).