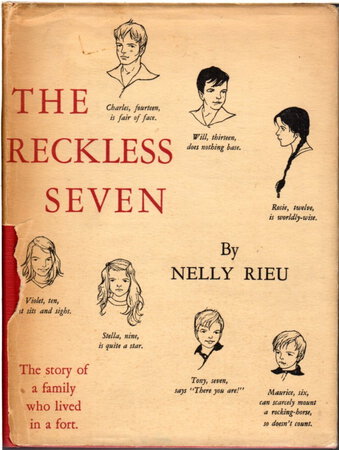 New York: Macmillan, 1930. dj. Hardcover first edition - Unable to find a house in London that they could afford and which would be big enough for their seven children, the Bailey family moves into a fort on Alderney one of the Channel Islands. All seven children are locked into a dark closet, marooned on a nearby island and they even discover a treasure. The author commented that this was inspired by holidays with her own children - even though they only had 4 children, her husband, Emile had to do "some real life saving work three times in the first week." Emile - or E.V. Rieu is best known for his translation of the Odyssey which was the founding title of the Penguin Classics - as general editor of the series, he oversaw the publication of 160 titles. While this (unfortunately) appears to be the only book Nelly wrote, she was also a translator of some of the Babar books. Illustrated with a color frontispiece, seven full page internal drawings on plain paper, and several smaller drawings as chapter heads. 299 pp.

Condition: Very good in red cloth with gilt lettering in a fair only dust jacket (approximately half of the dj spine is missing, original price of $2.50 still present on dj flap). Hard to find, and especially so in dust jacket, even a flawed one like this.