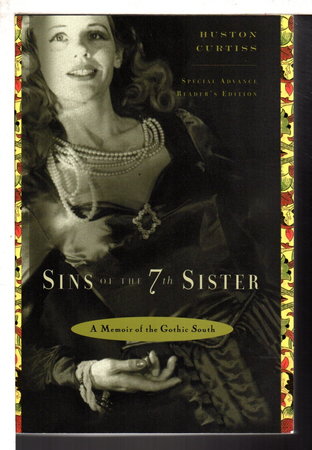 SINS OF THE SEVENTH SISTER: A Memoir of the Gothic South.

New York: Harmony, (2003). First edition - Although this advance issue calls this a memoir, when the book was actually published, it was described as a novel. In any case, it is too fantastic not to be based o a real story: " In May 1929, Billy-Pearl brought home a boy from the local orphanage. Stanley was sixteen, the age at which the orphanage kicked children out, and Billy-Pearl, knowing his sad history, could not allow him to end up on the streets. Stanley had witnessed his father beat his mother to death in a drunken rage and had taken a straight razor and slit his fatherÕs throat while he slept. A country judge had the boy castrated to control his aggressive ways. . . . quickly a friendship developed between the two that would last a lifetimeÑa friendship that would survive murder, suicide, madness, and StanleyÕs eventual transformation into Stella, a singer who would live her adult life as a glamorous woman." 355 pp.