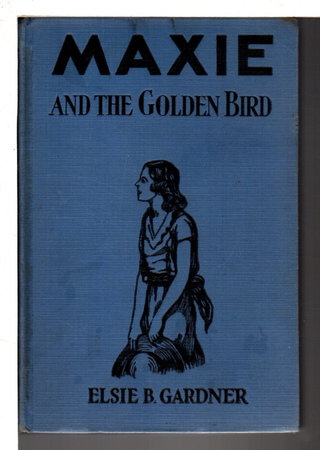 MAXIE AND THE GOLDEN BIRD; or, The Mysterious Council of Seven (Maxie # 7)

New York: Cupples & Leon Company, (1939). Hardcover first edition - The seventh and final book in this series of adventures set in Caribbean and Latin America, featuring Maxie, a young American girl who "has the ability of turning every event in her life into the most absorbing and astounding adventures, and when she is sent to visit her only other Uncle in the British West Indies, it proves to be the beginning of not only an entirely new mode of living, but a series of tremendously thrilling adventures and stirring deeds that every girl will thoroughly enjoy." In this book, Maxie has just gotten her pilot's license. The author, a war bride who came to Canada after World War I, had spent part of her childhood in Trinidad, and also travelled to the West Indies again and so she knew the area well. Glossy frontispiece.. Lists to self both at the front of the book and in the ads at the rear. 210 pp plus 2 pp publisher's ads.