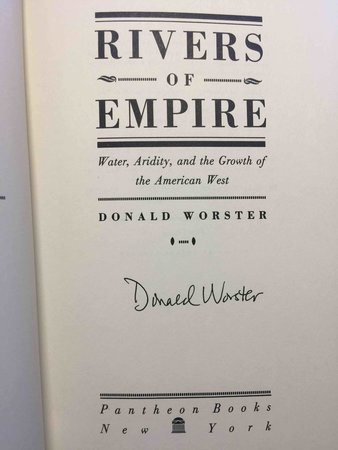 RIVERS OF EMPIRE: Water, Aridity and the Growth of the American West.

New York: Pantheon, (1985) dj. SIGNED hardcover first edition - A look at the development of the American West in terms of control of water by the wealthy and technological elites, from the railroad barons to the wealthy growers of the Central Valley. Wallace Stegner called this an "important book, sure to be furiously debated, is a history of the West in terms of its most essential resource, water....It examines how manipulation of water has combined with frontier myths, expectations, and illusions, some of them carefully cultivated by interested parties, to create the ambiguous modern West.." SIGNED on the title page, and uncommon thus. Worster received the Bancroft Prize in American history in 1980.Map, notes, index. x, 402 pp. ISBN: 0-39451680x.

Condition: Very near fine in a fine dustjacket (small check marks in the margins on a few pages).