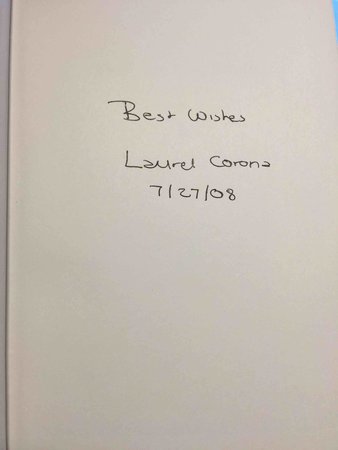 UNTIL OUR LAST BREATH: A Holocaust Story of Love and Partisan Resistance.

New York: St Martin's, (2008) dj. SIGNED hardcover first edition - "Following his fathers death, and with his mother in failing health, Michael Bart embarked on a ten-year research project to find out more details about his parents time in the Vilna ghetto, where they met, fell in love, and married, and about their activities as members of the Jewish resistance. . . . Shortly before the total liquidation of the ghetto, Zenia and Leizer, along with about 120 members of the underground, were able to escape to the Rudnicki forest, about 25 miles away. They became part of the Jewish partisan fighting group led by Abba Kovnerknown as the Avengerswhich carried out sabotage missions against the Nazi army and eventually participated in the liberation of Vilna." SIGNED on the front endpaper by co-author Laurel Corona and dated in the year of publication. Photographs, notes, bibliography. xxviii, 306 pp. ISBN: 978-0312378073.