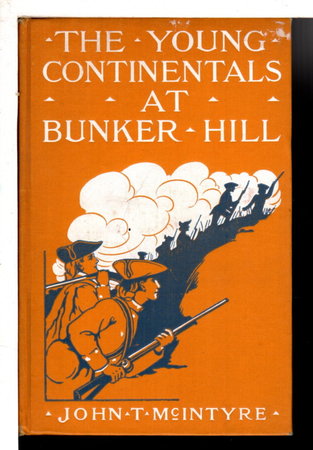 THE YOUNG CONTINENTALS AT BUNKER HILL, #2 in series.

Philadelphia: Penn Publishing Company, 1910. Hardcover first edition - The second book in this series set during the American Revolution featuring a group of four young boys and written "for boys from 12 to 17." Illustrated with a glossy frontispiece and six internal glossy plates by Ralph L. Boyer. Introduction by the author. McIntyre is also known for his crime fiction, his realistic novels of the underside of Philadelphia (he grew up in the tough slum of Northern Liberties) and for his historical novels. 347 pp. Illustrated endpapers.

Condition: Near fine in illustrated orange cloth with white lettering - previous owner's name on front endpaper, but an unusually fresh and bright copy of a rather hard to find title.