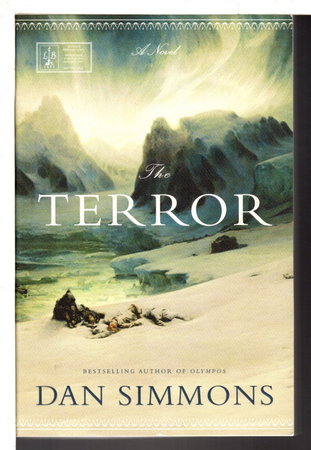 THE TERROR and promotional brochure.

Boston: Little Brown, (2007.). First edition - "A beautifully written historical novel, which injects a note of supernatural horror into the 1840s Franklin expedition and its doomed search for the Northwest Passage. Sir John Franklin, the leader of the expedition and captain of the Erebus, is an aging fool. Francis Crozier, his second in command and captain of the Terror, is a competent sailor, but embittered after years of seeing lesser men with better connections given preferment over him. With their two ships quickly trapped in pack ice, their voyage is a disaster from start to finish. Some men perish from disease, others from the cold, still others from botulism traced to tinned food purchased from the lowest bidder. Madness, mutiny and cannibalism follow. And then there's the monstrous creature from the ice, the thing like a polar bear but many times larger, possessed of a dark and vicious intelligence. This complex tale should find many devoted readers and add significantly to Simmons's already considerable reputation." (PW review) Nominated for the 2008 British Fantasy Award. Double page map frontispiece. 769 pp. Accompanying the book is an attractive promotional piece, in white and pale blue, with black lettering - a single sheet of cardstock with multiple folds, and a "letter" on onion skin paper inside.