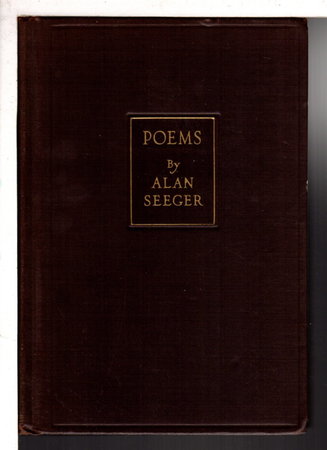 New York: Charles Scribner's Sons, 1926 (c 1916). Hardcover - A collection of virtually all the work of American poet of World War I, Alan Seeger (uncle of folksinger Pete Seeger.) Includes a long introduction by the English critic, William Archer, in which he looks at both Seeger's work and his life and war service, and quotes several letters Seeger wrote from the front. Seeger fought in the French Foreign legion during the War and was killed in the trench warfare in 1916. He is perhaps best remembered for the poem 'I Have a Rendezvous with Death' which is included here. xlvii, 174 pp.

Condition: Very good in brown cloth with gilt lettering on spine and front cover (some pages carelessly opened, rubbing to the lettering on the spine, but a clean and tight copy).