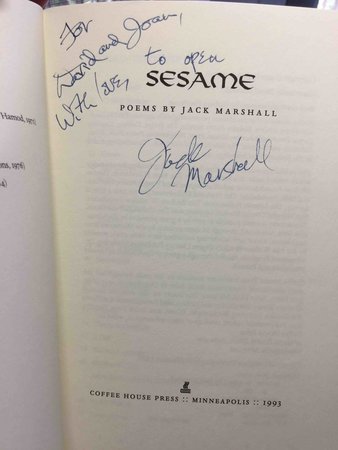 Minneapolis: Coffee House Press, 1993. SIGNED first edition - Many of the poems in this collection were inspired by the Gulf War, and they draw upon Marshall's own Muslim/Jewish heritage. "Marshall transports readers into a prophetic world where 'a bed/ is also a door' and a father can turn on the television and watch his son's plane being shot down. Vividly, graphically, he exposes war as the egotistical tool of the few who encourage others to die for them." (PW). INSCRIBED on the title page. Finalist for the 1994 National Book Critic's Circle Award for Poetry and winner of the 1994 PEN Center USA/West Literary Award for Poetry. 94 pp. ISBN: 1-566890152.