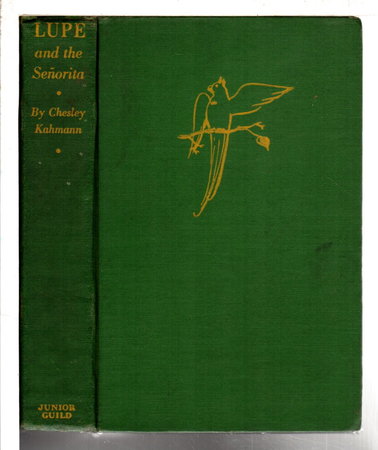 LUPE AND THE SENORITA.

New York: Junior Literary Guild / Random House. 1938. Hardcover - Lupe is a poor country girl determined to get an education and Teresa - la senorita -is the daughter of a wealthy hacienda owner. When Teresa has to return to Puerto Rico after a year and a half of college in the United States, she is resentful and unhappy, not the kind and helpful advisor Lupe had been expecting. A story of cultural differences, education, and romance set in early 20th century Puerto Rico, when it was just a territory of the US. Illustrated with drawings by Norman Reeves. Includes several pages of explanation and pronunciation of Spanish words. 276 pp. Yellow and green illustrated endpapers.

Condition: Good overall in green cloth with yellow lettering and a small illustration of a parrot on the front cover. Previous owner's name, spine slightly slanted but a sturdy copy.