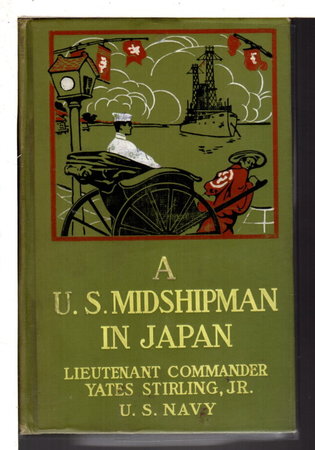 A UNITED STATES MIDSHIPMAN IN JAPAN, #4.

Philadelphia: Penn Publishing Company, 1911. Hardcover first edition - The fourth book in this series which follows the adventures of two young officers in the United States Navy. Interestingly, this series was written at a time when Stirling was serving as a Lieutenant Commander (he later went on to become a Rear Admiral, like his father before him.) Illustrated with a glossy frontispiece with a tissue guard and five glossy internal plates by Ralph L. Boyer. Uncommon in the first edition. 396 pp.

Condition: Very good in green cloth with an orange, white and black illustration and black lettering. Front hinge starting, some age toning and foxing, and a gift inscription dated Christmas 1911. Overall an unusually bright and attractive copy of a rather uncommon book.