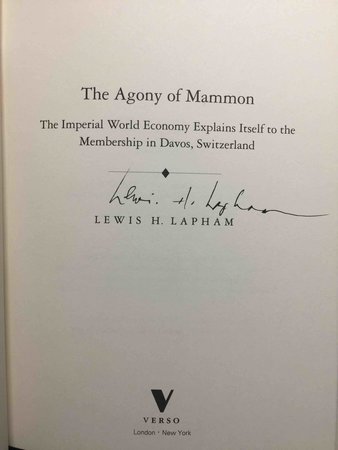 THE AGONY OF MAMMON: The Imperial Global Economy Explains Itself to the Membership in Davos, Switzerland.

New York & London: Verso, (1998.) dj. SIGNED hardcover first edition - A brief, but striking commentary on this gathering of the world's richest and supposedly most influential people. When Lapham was invited to attend the 1998 annual meeting, he didn't see how he could refuse - among the 1998 notables were Bill Gates, George Soros, Newt Gingrich, and Helmut Kohl, Nobel prize winning physicists, the chairman of Toyota and the Vice Premier of China. "After five days at Davos, he understood that the masters of markets and captains of commercial empire knew as little about the likely movements of the global economy as the waiters plying them with plum brandy and cheese fondue." SIGNED on the title page. Glossary, partial list of attendants. 84 pp. ISBN: 1-859847102.