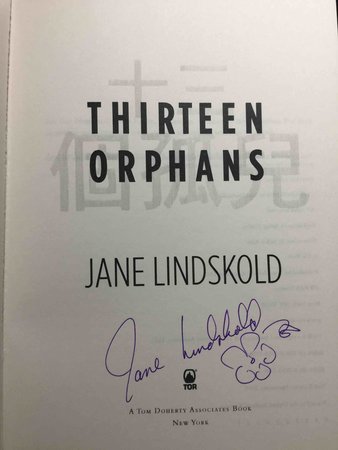 New York: TOR / Tom Doherty Associates, (2008). SIGNED first edition - The first book in a new fantasy series. ""As far as college freshman Brenda Morris knows, there is only one Earth and magic exists only in fairy tales. Brenda is wrong. A father-daughter weekend turns into a nightmare when Brenda's father is magically attacked before her eyes. Brenda soon learns that her ancestors once lived in world of smoke and shadows, of magic and secrets. When that world's Emperor was overthrown, the Thirteen Orphans fled to our earth and hid their magic system in the game of mah-jong. Each Orphan represents an animal from the Chinese Zodiac. Brenda's father is the Rat. And her polished, former child-star aunt, Pearlthat eminent lady is the Tiger." SIGNED on the title page with a drawing of a small flower. 367 pp.