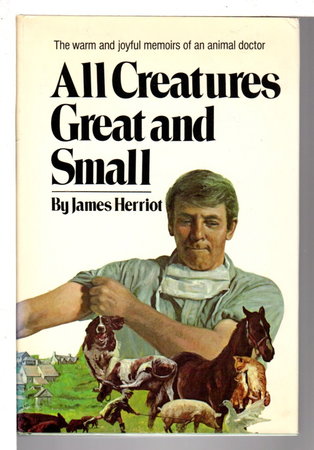 ALL CREATURES GREAT AND SMALL.

New York: St Martin's, (1972). Hardcover first edition - The first American edition is a compilation of Herriot's first two semi-autobiographical books, originally published in the U.K. as "If Only They Could Talk" and "It Shouldn't Happen to a Vet." Although Herriot referred to his books as "little cat-and-dog stories" the theme is really country life in Yorkshire and it is his shrewd observations of the people around him (most, of course, animal owners) which make his books worthwhile. Made into a television movie featuring Simon Ward, Lisa Harrow and Anthony Hopkins, and later into a popular and long-running BBC series. Reprinted many times, the first edition is very uncommon. 442 pp. Wraparound dust jacket art by Don Stivers.

Condition: Fine in green boards in a very near fine dust jacket, with just a hint on toning to the cream background of the dj. The original price of $7.95 is still present (this price is essential for identifying the first edition)