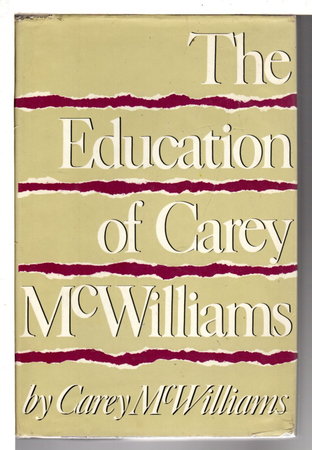 THE EDUCATION OF CAREY McWILLIAMS.

New York: Simon & Schuster, (1979.) dj. Hardcover first edition - Autobiography of this influential journalist, editor of The Nation magazine and fighter for social justice. In his books ( "Factories in the Fields," "Brothers under the Skin," "Prejudice") and in his articles McWilliams wrote about racial intolerance against Japanese Americans, anti-Semitism in the U.S., the McCarthy era witch hunts and wartime life in the U.S. As he describes it, he has known five worlds - growing up as a boy on a ranch in Northwestern Colorado, living in Los Angeles in the 1920s, the years of strife in California in the 30s, the war years, and the 30 years of the Cold War, years when he was the editor of The Nation. Bibliography, index. 363 pp. ISBN: 0-671228765.