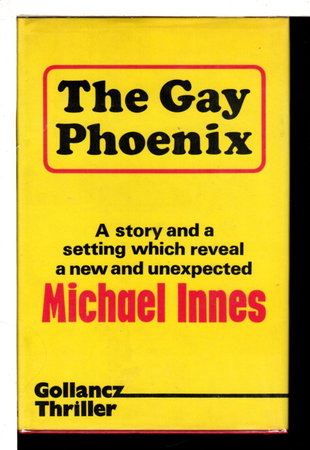 London: Gollancz, (1976) dj. Hardcover first edition - Detective novel featuring Sir John Appleby, now retired - from the dust jacket: "A small yacht adrift in mid-Pacific, its main-mast snapped, its navigator dead - that's the highly intriguing (and most uncharacteristic) opening of Michael Innes's latest story. The dead man is Charles Povey, a maverick tycoon. And there's a survivor on board: his brother Arthur, who, when at last he is picked up, semi-delirious, is assumed for several convincing reasons to be Charles himself. As Charles was the wealthy brother, Arthur is very ready to accept the error in identification. . . not surprisingly, there are one or two people who see through the impersonation, and make their blackmailing demands. Arthur is driven to marriage, crime, attempted murder and desperation. Unhappily for Arthur, he buys a country estate which makes him a neighbour of that greatest of detectives, Sir John Appleby, sometime head of Scotland Yard. Appleby is in retirement now, but he cannot resist a mystery almost on his own doorstep, and he is soon investigating." 192 pp. ISBN: 0-575021454.