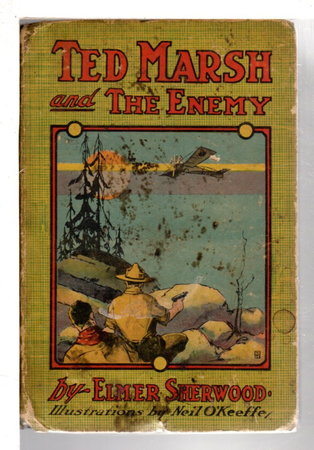 TED MARSH AND THE ENEMY, #4 in series.

Racine, WI: Whitman Publishing Co., nd (ca 1919). Hardcover - Originally published as a title in the Lucky Series, this is set against the backdrop of World War I on the border of New Mexico and Mexico, where the Germans are trying to persuade Mexico to declare war against the US, and other nefarious acts. Illustrated with 4 drawings on plain paper and illustrated endpapers by Neil O'Keefe. An unfortunate example of the worst in juvenile series, with poor writing and characterization , overt racism, and very cheaply produced, even for Whitman. 124 pp. small format, stapled text block printed on gray paper in illustrated paper-covered boards.

Condition: Fair condition only (loss at both ends of spine, corners bumped, other wear to the covers).