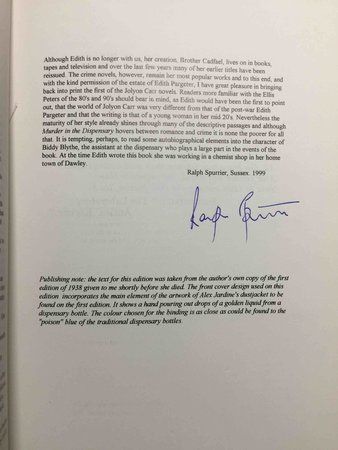 MURDER IN THE DISPENSARY.

Sussex, England: Post Mortem Books, Ralph Spurrier Publisher, 1999. SIGNED hardcover first edition - #127 of 350 numbered copies only, with a foreword signed by publisher Ralph Spurrier, in which he describes how he came across these books - which had never appeared in any Pargeter bibliography - at her home. Originally published in 1938, this is the first of the four novels written under the Jolyon Carr pseudonym. 311 pp.

Condition: Fine in royal blue cloth with a gold illustration on front cover, gold lettering on spine and front, no dust jacket as issued.